Preti Flaherty partner Bruce Gerrity has been appointed by members of Maine's congressional delegation to a judicial screening panel for a seat on the federal bench.  Congressman Mike Michaud, Congresswoman Chellie Pingree and Senator Angus King appointed Bruce to screen candidates for the seat currently held by Judge George Singal on the US District Court for the District of Maine.

The panel is charged with advising the members of Congress on which candidate to recommend to President Barack Obama for nomination.

Bruce Gerrity is one of Maine's leading litigators and an accomplished legislative and regulatory attorney, practicing in the firm's Augusta office. In his more than 30 year legal career, Bruce has argued cases and advocated policies that have shaped Maine law in the areas of insurance, workers compensation and franchising, among others. 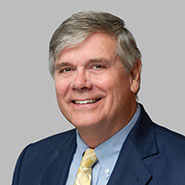